What Did We Learn Here: #StopKony ? 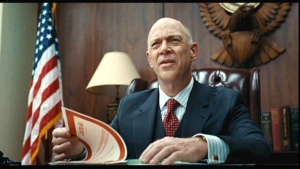 There is a fantastic scene at the end of the much underrated Coen brothers movie, Burn After Reading, where J.K. Simmons (pictured right) asks the question of the string of unlikely events that make up the plot of the movie, “What did we learn here?” The C.I.A. agent who is recounting the story looks back at him puzzled and says that he has no idea. Simmons shakes off the strangeness of the event and agrees, “me neither”. It is the perfect ending to a movie that explores a seemingly random collection of tragedies and misunderstandings.

This past week, I found my self in the same puzzled situation. A video was released by the Invisible Children group promoting their 2012 campaign. It was attached to the tags, #StopKony, #MakeKonyFamous, or #Kony2012. To say that the video went viral is a gross understatement. Here is a chart showing how quickly the video went viral.

In case you aren’t good with bar graphs, StopKony had 100,000,000 views on YouTube in 6 days! If my math checks out, that is nearly 200 views every second! Unless you live under a rock, your social media feeds were blowing up with links to the video and the tags listed above. As quickly as the video rose in popularity, a number of articles criticizing the campaign went up. You can read some of them here,or here. Then, just as quick, Invisible Children fired back with this article detailing their side of the story. Click Here to read it.

Soon, many people were back on social media pointing out either a) the disingenuous nature of the campaign or b) it’s legitimacy. If your social media feed was anything like mine, some of the same people were posting both!

My aim here is not to weigh in on the question of whether or not StopKony is a good thing or a bad thing. My goal is to ask, “What did we learn here”. We are less than 10 days away from the posting of the video to YouTube and the sound and the fury has settled down. As I reflect on the whole kerfuffle, I think there are 3 things for us to learn, especially as Christians.

1. Our use of Social Media is not that much different from the world around us.

One of the things that was so fascinating about this campaign, and surely a part of it’s viral nature is the number of celebrities who jumped on board and were tweeting about it. Oprah, Justin Beiber, Kim Kardashian, and Chris Brown all tweeted about the film. The video transcended religion or lack thereof. We as Christians watched the film and jumped on board in the exact same fashion as everyone else. I am not sure that this is necessarily a bad thing, but it is worth noting that our social media behavior was nearly identical to the world around us. We may have cloaked our language with more moral/biblical imperatives, but the content was the same.

2. We are victims of the same “news cycle” mentality as everyone around us.

It’s now 10 Days later, and there is not a single enduring mention of Kony in my twitter or facebook feed. The local high school who changed their fence art from “Class of 2012” to “#Kony2012” has reverted back to the celebration of their graduation date. In our world, information travels at the speed of…well, I don’t know; but I am sure it is fast. There is a good chance, if Joseph Kony was worried this time last week, he probably isn’t now. People have forgotten about him. He has been relegated to the ranks of things our parents will ask us about next week. Look at this chart comparing searches on Google for “Stop Kony 2012” and “Snooki Pregnant”

How in the world are we as Christians supposed to engage in long term discipleship in a culture that flies from one idea and cause to the next in a matter of days. It may become that one of the hallmarks of 21st century Christianity is our slavish devotion to talking about things for a long period of time. If we are willing to “hear the conclusion of the whole matter”, will this make us strangers in a foreign land where, by the time conclusions can be heard, people have moved on”.

3. We have not developed a culture of wisdom regarding social media.

This is, I think, the thing we as Christians need to consider deeply. How is social media shaping us? And the next question on that road is, “how is our message being shaped by social media?” We are blindly and thoughtlessly using social media. Sometimes we think of it as a great tool for connecting with others. It is. Sometimes we enjoy the benefits of having the google search bar and wikipedia just a click away. But is this effecting us? What is our theology of social media? I am not suggestion some Luddite retreat from technology. I am not suggesting we move to the desert and unplug. But at the same time I fear, for myself and for my children, that we are allowing these things to become so second nature that something is missing. I just can’t figure out what it is that I am missing.

I should probably just google it.

Towards a Theology of Cultural Engagement

The church has debated the relationship it should have with the world since the earliest times. Just over a century after the death of the Apostle’s, Tertullian mused, “What does Jerusalem have to do with Athens?” The heart of Tertullian’s question was, what relationship does Christianity have with culture. The church has debated this topic ever since.

In the 1950’s, Richard Niebuhr’s book Christ and Culture set the agenda for all discussions on the topic that would follow. Neibuhr classified five approaches to culture. First, Christ Above Culture. This carries the idea that Christ is so transcendent that he is separate from culture. Culture deals with daily human issues, Christ deals with the weightier issues of the soul. Next, we see Christ and Culture in Paradox. This view pits Christ against culture, not in a hostile way, but more in an indifferent way. Christ is over here, culture there, never the two shall meet. As we approach the more common views we find Christ Against Culture. This view posits that culture (both pop and high) if not done explicitly for the glory of God by Christians is by its very nature hostile to God and Christianity. This is the prevailing view of popular, American evangelicalism. It is what has created the Christian ghetto, sub-genrizing anything it can. Since the turn of the millennium, the view of Christ of Culture has picked up steam. The Anglican revival coupled with the rise of the Emerging church has given new life to this view, previously buried by the other views. This view says that culture flows from Christ. It is often critiqued because of its failure to distinguish carefully from what is God’s Word and what are the mutters of the culture. The final category that Neibuhr presented was Christ Transforming Culture. This view (held mostly by Reformed Christians) carries the idea that Christ is very present in this world and “He is making the Kingdom of this world to be the Kingdom of our Lord and of His Christ” (to borrow from Isaiah/Handel).

As Christ kingdom grows in its expression we find the Gospel in seed form in places where Christianity is unknown. There are numerous examples of this, but one in particular comes to mind. In Japan there is a folk-legend called Hanasakajijii. This legend tells the story of two neighbors in dispute over a magical dog. After a bit of intrigue, the dog is murdered and transported to the floating world. As the family mourns, they are comforted by the “man who makes dead trees bloom”. This man restores the land from a drought. This is an extremely poor retelling of the story, but as early missionaries arrived in Japan, this story quickly helped the Christians explain their faith in an intelligible way. It was a cultural point of entry where adherents to Japanese folk religion could be engaged and taught of the gospel.

Here it may be helpful to distinguish between cultural relevance and cultural engagement. Many who find themselves in the Christ against Culture camp still use culture for a number of purposes. Often the idea is simply to illustrate a point or in other cases simply to show that the speaker is not “afraid” of culture. These uses are typically guarded and sparse. The idea here is to garner attention or to prove a point. This differs greatly from cultural engagement. In cultural engagement a speaker/minister/whatever may reference a number of pieces of pop or high culture. The idea is not to garner cool points or even to simply illustrate a point. Here the goal is a bit broader, by incorporating pop culture, the speaker is modeling a lifestyle that engages the world around the hearers and cultivates the beauty from the ashes. It finds the cultural touch points that have been buried in the culture and excavates them, showing where Christ has gone before us. We participate in His redemption of the world by sifting the beauty away from the ashes. We can see the messianic beauty of Children of Men, the redemptive significance of The Matrix, the nature of narrative in Stranger than Fiction. Here the goal is not illustration, but the cultivation of a life that engages the world with our beliefs and seeks to understand how and where Christ is working.

In closing it may be helpful to give the Biblical rationale for this view. When Paul came to Athens, he found a culture inundated with views, opinions, beliefs, and idolatry. When he was invited to speak at the Areopagus, Paul preached (Acts 17) one of his most eloquent sermons. In this sermon he quoted Epimenides of Crete in verse 28. This is the same Epimenides who was responsible for one of the most popular accounts of the origins of the Greek gods. These Theogonies (accounts of the where the gods came from) were often graphic and read more like a soap-opera than a history. Paul however engages Epimenides and shows how he was (inadvertently) speaking the truth. He then quotes the poem Phanomena by Aratus. This poem is a praise song used to worship Zeus. Nevertheless, Paul culls the truth that we have our being in YHWH, not in Zeus. Paul quotes other works in his epistles as well. He even quotes Epimenides a second time in Titus. Paul engaged his culture, and I believe this should be normative for us as well.